skip to main | skip to sidebar

How to Jailbreak and Unlock ANY iPhone, iPod, or iPad the safe and easy way

Searching for the Network Control Key

Every SIM card has a unique IMSI (International Mobile Subscriber Identity) number of between 14 and 15 digits. The first three digits are the MCC (Mobile Country Code) and the next two or three the MNC (Mobile Network Code).

The iPhone's baseband radio's firmware is locked to only work with SIM cards with IMSI numbers starting with the digits 310410, i.e. Mobile Country Code = US* and Mobile Network Code = AT&T.

According to the iPhone Dev Wiki the radio firmware can be unlocked with the AT command:

where xxxxxxxx is a number specific to each iPhone. I suspect - although the wiki does not say so – that the "specificity" is based on the unique IMEI number that every GSM phone has, including the iPhone.

The x's are the NCK (Network Control Key). Brute-force can't be used most notably because "there is a limit of 3-10 unlock attempts per phone, after which the firmware will "hard-lock" itself to AT&T".

It's been two weeks since the iPhone launch and despite wild rumors and some real progress, no one has – at least publicly – managed to unlock the iPhone SIM-lock to AT&T.

As reported here the iPhone will be released un-simlocked, at least in some countries.

In the meantime I'm scrounging the forums looking for breakthroughs that I'll report back here.
Posted by Anonymous Coward at 12:29 AM No comments:

iPhones in France - law says they must be unlocked 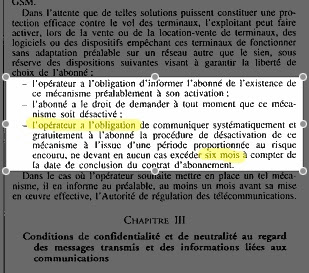 In the United States mobile phones may be unlocked but phone operators are not legally obliged to assist you.

In France however, according to a by-law passed on the 17th of November 1998 (text, scan), phone operators are obliged to unlock your phone, for a cost during the first 6 months of a contract but for free after the initial 6 months.

All three operators have lost civil lawsuits citing this by-law: Bouygues Telecom in April 2000, France Telecom Orange in January 2002 and SFR in October 2002.

iPhone Development Project: 2 down, 6 to go

Only five days since the iPhone release and the iPhone Dev Wiki has reached 2 of its 8 goals:

I'll be watching the fourth in the list, and will report any findings here in this blog.

Update 7 July: links to iPhone Dev Wiki removed on request so as to reduce their server load.
Posted by Anonymous Coward at 12:43 AM 1 comment:

Why the iPhone should be unlocked and SIM-Free

There's a great article over at allaboutsymbian entitled Unlocking the Mobile Phone: Why we need to go SIM-Free.
It explains why myths such as "Phones need phone network operators, that's why they have unusual pricing arrangements" is simply not true. Well worth reading!
Posted by Anonymous Coward at 1:23 PM 3 comments:

I'll be following the Consolidated iPhone Hack Unlock Thread on hackint0sh and reporting back here with any breakthroughs.

It's my feeling that the hackint0sh community stands a good chance of being one of the first to unlock the iPhone.

Here's where they stand today:

Posted by Anonymous Coward at 6:29 AM No comments:

It will be interesting to see what Apple does if and when the iPhone is sold in Belgium as, according to Wikipedia:

Know of any other countries where this is the case? Please feel free to comment.
Update 11 July 2008: OK, The Register and Wired have the story 1 year after you saw it here ;-)
Posted by Anonymous Coward at 5:16 AM 6 comments:

All about SIM Locks 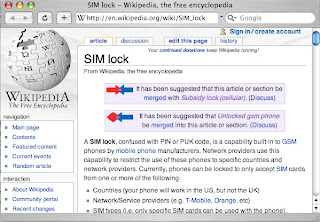 Looks like the iPhone has a service provider lock (SP-lock) to AT&T that:

[...] ensures that the handset is only used with SIM cards for the same service provider that marketed the handset

However, some providers, including the former AT&T Wireless, never unlock handsets, even after a customer has fulfilled their service contract.

Posted by Anonymous Coward at 5:00 AM No comments:

Gizmodo reports that Bluetooth can't be used for file transfer, Bluetooth printing, or headset streaming. My guess is that it won't be usable as a modem either, sigh.
So not only do we need to find a way to unlock the SIM card from the iPhone, now we also need to unlock the Bluetooth. Eeeks!
Posted by Anonymous Coward at 2:28 AM 5 comments:

With the the iPhone just released, Gizmodo reports that iphoneunlocking.com are "beta testing" a iphone unlocking service and that arstechnica has the story.
I guess time will tell whether these business are legit.
Thanks Robert for the tip!
Posted by Anonymous Coward at 5:32 AM 1 comment: